Skip to content
Home/Fiction, Novels/What We See in the Smoke

What We See in the Smoke

The world we know is coming to an end. How will we connect in the strange and frightening one that’s coming to take its place?

What We See in the Smoke twists the genres of realism and science fiction to tell the future history of Toronto, a story that stretches from this millennium to the next. The novel leaps across the boundaries of time and space, as present and future Torontonians search for meaning, connection, and love in a city that grows more beautiful and frightening as its familiar characteristics fade away.

A musician is caught in an endless time loop unable to reach those he loves, two broke and desperate men plan a heist of a cannibal auction, a detective with sinister proclivities hunts for a criminal who is stealing dreams, and a college student searches for his brother in the hours before a nuclear war. All of these and more lead to a world where only rich cyborgs or the homeless remain, where teleportation has made crime impossible, and where city-sized spaceships are maintained by strange creatures while planet Earth itself is left behind.

Ben Berman Ghan spins a web of these lives and many more, blending the familiar with the surreal until both give way to the story of ordinary people in extraordinary times. 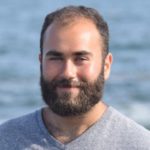 Ben Berman Ghan is an author and editor from Toronto. He is a recent graduate of the University of Toronto with an HBA in English Literature and minors in Philosophy, and Writing and Rhetoric. While attending the University, he served as a prose editor on both The Spectatorial and The Goose. He is the author of many short stories which occur at the intersection where the ideas of classic science fiction and the concerns of all literature meet. When he is not hacking away his writing, Ben can be found buried beneath comic books and sticky notes of jokes, or interrogating cats — convinced they know what’s really going on, and just won’t tell him.

“Drawing on the many threats to human and planetary survival today, What We See In The Smoke careens through a future trajectory that’s both epic and intimate, cautionary and compelling. In increasingly cruel and desperate times, these characters learn that living depends ultimately on acts of love. Ghan’s book is as refreshingly tender as it is unflinching.”
– Sharon English: Author of Zero Gravity and Uncomfortably Numb

“Ben Berman Ghan is that rarest of authors: he is a master storyteller who is undaunted by boundaries, sliding seamlessly between forms as he weaves beautifully crafted short stories into a startling apocalyptic novel. This book that shows us both the forest and the trees in one stunning expression of power. Literature, memory, prophecy, and a gift for narrative come together in this powerful symphony where the past, present, and future co-exist in an exquisite opus. What We See in the Smoke reveals what stories can and should do when they give the reader scope to see through so many glasses darkly in one perfect vision.”
– Bruce Meyer, Author of The First Taste: New and Selected Poems

“Ghan’s mosaic of a Toronto—and a world—that was, is, and might one day be, is one of myriad apocalypses, big and small, personal and crushingly literal. This book, like Ghan’s writing, is tender, complex, and without reservation.”
– Andrew Wilmot, author of The Death Scene Artist

“Part novel, part anthology, Ben Berman Ghan‘s What We See in The Smoke is an evocative and powerful read. Each chapter is a separate short story that can be read on its own, independent of the other chapters. Taken as a whole, they form a grand epic of humanity’s descent into the far future–through a Torontonian lens. Each section and story progressively moves further from the Toronto (and Earth) we know.
The sci-fi elements are both outlandish and belieavble. The tone is often dark and sometimes funny, and there’s always something at stake that hits at the heart.”
―MW Cook

“[T]he whole novel feels like Toronto — all of its tragic and painful moments, which happen more often than expected — are caught up in cherry blossoms, major intersections, and, of course, the unassailable CN Tower. …
But that familiarity deceives. Ghan allows you to become comfortable in a surrounding you feel like you know, before making you believe that you never knew it in the first place. This happens to the point of uncanniness, where the feeling of Toronto, despite all the changes each story makes in plot and content, begin to signal something uneasy. For Ghan, there are only two certainties in Toronto: a mild-yet-still-somehow-debilitating winter and similarly enduring business development.
Despite its unique motley demeanour, What We See ends up being a novel rich in motifs that the average Torontonian can recognize and understand. A mixture of the heinous and the righteous, and a spark of constant renewal that keeps it all in flux, Ben Ghan’s debut is a solid underscoring of the Torontonian ethos.
Ghan seems to ask each of his stories, and the reader as well, what Toronto they would like to see. How would you give Toronto the identity it so desperately aches to discover?”
―The Varsity