The future depends on reconnecting to our past…

Do you have the courage to hit the reset button in your life? Does humanity as a whole? Madeleine White’s sci-fi novel Mother of Floods immerses the reader in the brave new world of 24/7 self-sustaining algorithms, showing how individual choices can lead to powerful ripple effects–if we are bold enough to collectively remake ourselves and the world around us.

In a work that is underpinned by strands of ancient and modern mythology, White explores what it means to be human in the 21st century as digital, physical, and spiritual worlds collide. Mother of Floods is set at the end of our world, and it follows Martha and Dave Johnstone, her dead husband who lives on in digital form, as they embark on a journey to heal their troubled family and overcome mountains of debt. As they receive support from three women from different backgrounds and countries, the interlocking narratives become a battle for the soul of the world, and connections between the spiritual, technological, and human worlds, create a transformative energy that infects the digital world, creating a new kind of being. In other words, the Internet gets a soul.

Fans of Paulo Coehlo’s The Alchemist and Margaret Atwood’s The Handmaid’s Tale and The Testaments, will enjoy how the impersonal, transactional information superhighway is transformed into a sentient force for good, with the language of electric pulses shaping words of power that convert the thoughts we think into positive changes in our physical world. 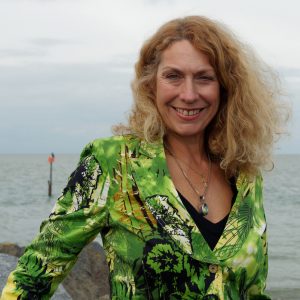 Madeleine F White was born in Germany, with roots in Canada and the UK. Her 25 year career has spanned journalism, teaching, educational technology and publishing. As a publisher she has created national and international web and print magazines aimed at creating a voice for those without one. A notable example of this is the successful Nina-Iraq, a project that she worked on with the World Bank to reach out to Iraqi women everywhere.

These days, Madeleine is a ‘storyteller’ consultant, working with educational technology companies and international development partners to connect diverse cultural, geographical and digital communities. Her debut novel, Mother of Floods, has been inspired by the growing belief that fiction is often more powerful than factual journalism in opening us up to truth.

Madeleine is married with three children and lives in Broadstairs, a small coastal town in England.

On Facebook, she had announced Dave’s death. Here, she was the grieving widow who put the occasional post up that everyone liked, in order to show they cared. Smiling through the tears was who she was on Facebook, giving others the opportunity to feel better about themselves with a click and a comment. Here she was liked and likeable. Sometimes, she thought, she preferred the digital Martha to the real one. That was certainly the case on her professional sites. No reference here to anything bad in her life. Here she was meticulous Martha, a networker to the core, picture from about ten years ago, with opinions based on whoever was paying her.

As she heaved herself out of the car, she noticed that the air conditioning had definitely taken the edge off the heat of the day. It was only 9:00 a.m., and the tarmac was already sweating. She found herself in the baked goods section in front of shelves that throbbed with scents and colours. Whatever it was that had stripped colour and light from other parts of her life was strangely absent here. Lobbing some reduced-price croissants into her basket, along with a few other things she fancied, she topped her food shopping off with a half-price tray of sushi. Glancing at her watch, she knew there were just the make-up wipes left to get. She was already well past the fifteen minutes she’d allowed herself.

This was something that did matter. Samantha-Jane, her thirty-something boss, had made it clear that her tardiness would not be tolerated for much longer. The fact that Martha had been delivering substandard copy had not helped either. As she felt her anxiety mount, Martha’s heart rate sped up, its beat catching at the base of her skull. As she lengthened her stride, the rhythmic thudding of her feet on the ground only served to further increase her pulse rate while making the fleshy friction between her thighs even less comfortable.

Glancing up the toiletries aisle, she spotted the make-up wipes. She made a grab for two packs that were on special offer and plonked them in her basket with a sense of satisfaction. The thudding at the back of her head had got even louder, a sure sign that her anxiety was getting out of hand. To focus on the practical, she surreptitiously looked for any tell-tale damp patches under her armpits.
She stopped in her tracks. Her hand had disappeared, and the basket she was holding was floating in midair. Closing her eyes, she felt an odd, counterpoint heartbeat thrumming through her entire being. What was happening? When she finally plucked up the courage to open them again, she heaved a sigh of relief. Her hand was most definitely back where it belonged again, flesh bulging out around the wedding ring she hadn’t, as yet, been able to get off.

She felt tears well up. In the real world, it wasn’t just her hand disappearing; it was all of her. Not even her children saw her any more. They just wanted her to do and get things for them. She looked back down at her hands and realised that something had to give. As she focussed on the last echoes of the beat she’d felt run through her, she hoped to goodness it wouldn’t be her sanity.