An angry mayor and civic authorities impose a narrow vision of the future on a working class neighbourhood.

It’s the 1960s, Lowertown, Ottawa, and the future is rolling into Canada’s capital. The technocrats have plans for spiralling highways and dazzling glass towers. Religion, community, and people are a blight in the way of such progress.

But the future is fighting back – a young man in the 2000s, helped out by his neighbours, struggles to rebuild Lowertown and find his own identity. Meanwhile, a darkness named Blight slowly devours the community causing turmoil among its residents and the local French-Catholic heirarchy. Though time separates them, both the angry mayor and the young man try to change Lowertown, to unexpected results. 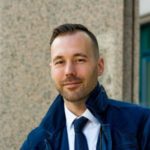 Marc Aubin is a fifth generation resident of Ottawa, Canada. Over the past two decades, he has been involved in community activism and historical research in Lowertown — Ottawa’s original French-Canadian neighbourhood. During this time, he has accumulated a set of stories about his community’s struggles and its unique identity.