Venus&Document is a powerful reassertion of the political and philosophical importance of the contemporary novel; it is a brilliant intellectual comedy about the tyranny of “current events,” and the culture of perpetual crisis.

Jared Marcel Pollen’s debut novel Venus&Document, gives lyric voice to philosophic insight and addresses itself directly to the cultural maelstrom in which we find ourselves.

The novel is set in New York City after a natural disaster strikes and strange demonstrations begin to spring up all over the globe, with thousands of people occupying Central Park. Paul Kenning, journalist and writer, receives a special assignment by his editor to write about these mysterious “Events.” Paul comes to find himself with a monumental task – he believes he can write a great essay that will diagnose the ails of modern culture and explain the times in which he lives, certain that mass enlightenment, or perhaps his own death lies at the end of his effort.

Paul Kenning is a comic figure for these strange times. As he navigates the affairs of his love life during a time of distress, he must explain it all – the rising tides, rising crime, refugee crises, political corruption, income inequality, racial injustice, and the overwhelming daily influx of information. Can he keep up with the relentless pace of events, as everything––including history itself––seems to be accelerating? 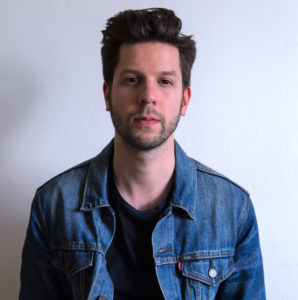 Jared Marcel Pollen lives in Prague. He was born in Canada, studied politics and literature at the University of Windsor and received his MFA from Sarah Lawrence College in NY. Venus&Document (2022) is his debut novel. His book of short stories The Unified Field of Loneliness, published by Crowsnest Books (2019), collects ten stories which take place from Paris to New York to Vienna to London and locates characters living in a condition of terror, solipsism, and displacement in the technological age. His work has appeared in the Los Angeles Review of Books, Quillette, Tablet, 3:AM Magazine and Liberties.

“The stories in Jared Marcel Pollen’s debut collection proceed with a surgical intensity, as they endeavor to expose the crackling wires of consciousness itself. The Unified Field of Loneliness is a reminder that fiction exists in service to truth, a principle that Pollen embraces with courage, dexterity, and wit.”
– David Hollander, author of L.I.E.

“Jared Marcel Pollen drills into moments that take both his characters and his readers far past the borders of comfort, where ordinary human maneuvering assumes transcendence.
These stories traverse the intimate, the global, the lonely, the brutal. His vision is as clear as it is subtle. We’re fortunate to have him and this astounding debut.”
– Nelly Reifler, author of See Through: Stories

“Jared Marcel Pollen’s fiction is rich with mind–with an intelligence both moral and mischievous. Readers of Helen DeWitt and Ben Lerner will find here another writer to admire.”
– Brian Morton, author of Starting Out in the Evening