The NeverMind of Brian Hildebrand

Brian Hildebrand is in a coma. Severely brain damaged in the unlikely and self-inflicted accidental event of being run over by his own car, he is diagnosed as being in a permanent vegetative state; a “no hope” case kept on life support only at the stubborn insistence of his mother. Sounds grim, doesn’t it?

But wait. This is a comic novel, and Brian is not the vegetable he is deemed to be. In fact, he is the narrator and protagonist of this possibly impossible tale.

Unbeknownst to his caregivers, Brian is fully conscious, fully cognitive, fully aware, and, inexplicably, smarter than ever. A prisoner in his own frenetic brain, he has morphed into a polymath and multi-dimensional thinker, and is, somehow, able to tell his off-the-wall story as it veers tale-twistingly and mind-bendingly from the haunting to the hilarious, abetted by a far-out cast of characters, possibly of his own creation, possibly not.

In his head, he consorts with angels, consults with ghosts, and dances with demons, with the clamor and chaos of many worlds simultaneously spinning about in his battered but upgraded brain. How Brian can accomplish all this is the overriding riddle of his saga that is resolved, perhaps, magically.

Or maybe it’s all in his mind. His muddled but magical mind. 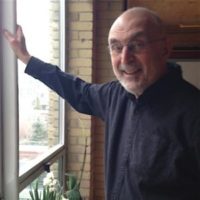 Martin Myers is the author of four novels, The Assignment, Frigate, Izzy Manheim’s Reunion, and The Secret Viking. With comparisons to some of this past centuries’ greatest humourists including Mel Brooks, Woody Allen, and Monty Python, Myers richly inventive writing is sure to make readers laugh out loud followed by a quizzical moment where they question their own morals, ethics, and reality. His writing has been glowingly reviewed throughout North America and Britain by publications such as The New York Times, Publishers Weekly, Toronto Star, and The Times of London Literary Supplement.

“It’s not usually a compliment to say ‘this book put me in a coma.’ But in the case of The NeverMind of Brian Hildebrand, you won’t want to wake up. Martin Myers is a very funny and inventive writer, which makes sense, because he’s written a very funny and inventive novel. In The NeverMind of Brian Hildebrand, Myer’s pulls off quite the feat of storytelling. His narrator is in a coma, and yet, he kept me turning the pages and chortling away all the way through to the end. If you think you’ve got a few voices in your head, you’ve got nothing on Brian Hildebrand. This is quite an extraordinary novel that few writers could have written. Luckily for us, Martin Myers pulls it off brilliantly.”
– Terry Fallis, author and two time winner of the Stephen Leacock Memorial Medal for Humour

The broad strokes are these: Brian is run over by his own car while texting — run over badly enough that his caregivers joke about the Michelin treads on his skull. He is in a coma, diagnosed as being in a Permanent Vegetative State (PVS). He can’t move, or speak. But vegetative he is not: in his head, he is going a mile a minute, morphing into a polylingual polymath, holding conversations with a multitude of visitors inside his mind — a small girl (who might or might not be the daughter Brian never knew) doing her math homework in Sedona, Arizona, a Zuni Indian shaman posing as a hospital window washer, a psychic professor from York University, a now-dead former resident of the long-term care facility housing Brian and, of course, God (or G-d), who is happy to tell Brian that, sorry, he “doesn’t do helpful”. And of course, Brian is the author of this book…

Or is he? His caregiver, Jefferson, is also writing a book, a metafiction meditation of his own. Is it about Brian? Is it Brian’s book? Does Brian even exist, outside the book, whoever the author? Jefferson is coy about the ending, possibly because he himself is one of Brian’s creatures. Where does a circle end?

Myers has always been a funny writer, a product of native wit sharpened through many years in the higher reaches of advertising copywriting; but here the funny is harnessed in the service of a deep reflection on the nature of reality and existence; the dizzying wordsmithery not just dazzling for its own sake, but a way into the possibly plausible and impossibly possible, a very quantum idea.”
– Marq de Villiers, author and journalist

“As Albert Einstein has observed, ‘Creativity is intelligence having fun’ —
and that is an apt description of Martin Myers’ latest gem, The NeverMind
of Brian Hildebrand. On page after page, Myers offers us unbridled creativity,
astonishing intelligence, and loads of cheerful wordplay[ and other fun] in almost
every paragraph. He and his characters make us laugh, make us think, and
they make us very grateful to be ensnared in such a delightful literary web.”
– Paul Chutkow, Author/Journalist

“I first knew Marty Myers as the principal of one of Canada’s most creative advertising agencies. He had a reputation for writing copy that was sharp, taut and effective. This gift has grown in his novels.
With Brian Hildebrand he has created a memorable character who defies his impossible health condition to become our guide in a fantastical story. As in his previous novels, Myers brings his trademark wit to bear. His prose works with a one-two punch — first it provokes and amuses, and then leads to deeper reflection on the human condition.
Myer’s creative powers are up to the challenge of channeling Hildebrand’s wild, unmoored imagination, as he consorts with with a cast of fantastical support characters.
The narrative structure of NeverMind of Brian Hildebrand does not follow a straight line or predictable arc. We are led on a jarring journey, with lots of twists and surprises, including the jolt at the end.”
– Peter Giffen, Author

“The Nevermind Brain of Brian Hildebrand, by the talented Martin Myers, is a mind-bending, mind altering, and mindful novel, narrated from the perspective of a young man locked in a coma, who is fully cognizant and aware of his surroundings. Brian Hildebrand has a problem: he can’t communicate outwardly, but boy can he think! And think he does about the biggest existential questions, spirituality and ultimately the meaning of life.
Myers’ writing is peppered with razor-sharp prose, poetic musings, and a generous dash of wordplay and puns. The heady narrative (or is it meta narrative?) is a hilarious tale of a family and the ragtag cast of characters drawn to them and their Brian-induced plight. It also features a few other worldly folks who drop in and out of Brian’s brain and whose other questionable existence never stands in the way of their angst-driven insecurities. Myers’ created an original and complete world that is both ‘ahead’ and of its time. The pace is breakneck, the prose are breathtaking and the premise brilliantly hilarious. Highly recommended!”
– Martin Waxman

“Martin Myers takes satire and humour to new heights with his latest novel The NeverMind of Brian Hildebrand, a man who goes into a coma after being run over by his own car. Five years on, our protagonist is considered by the experts to be in a ‘permanent vegetative state,’ while unbeknownst to them Brian is aware of everything and his mind has reached the absolute highest levels of mental acuity. Unfortunately, being comatose limits one’s abilities to make that known. The cast of characters and storyline are vintage Myers, whom I first encountered when he taught writing to university students lucky enough to land him as their instructor. That experience introduced me to Frigate, his comic novel about a man who loses his prime appendage on page one. Our place in the universe and what it all means are themes he continues to explore at the intersection of Socrates and Woody Allen.”
– Jerry Amernic, Author