“As riddlesome as Tolkien and a rollicking as Howard, The Gatewatch is a timeless tale from the heart of northern myth.”
—Ian Stuart Sharpe, Creator of the Vikingverse Novels and Comics
“[A]n enjoyable tale with magic, friendship, a fantastical world that is old and rooted in Norse mythology.”
—Kriti Khare, Armed with a Book

Torin Ten-Trees and his closest companions, Bryn and Grimsa, set out to join The Gatewatch and become trollhunters. When a troupe of meddling dwarves throws them off course they are captured by trolls and taken as prisoners to a secret gathering deep underground. There they learn that an ancient giant has crowned himself king of the trolls and plans to utterly destroy The Gatewatch. Their perilous journey back to the land of sun and stars will stretch their strength to the limit, strain their wits, and demand an unspeakable sacrifice. But will it be enough to defeat the Troll King?

The Gatewatch is a young adult fantasy adventure inspired by the Norse Myths, the Icelandic Sagas, and the unforgettable landscape of the Rocky Mountains. Myth, history, and imagination fuse together in an epic troll-hunting saga written for young adult readers.

Learning guides for teachers and students are available for free download. In these guides, author and teacher Joshua Gillingham provides a plan—complete with discussion questions, assignments, and links to additional resources—for using The Gatewatch as a supporting narrative to enhance classroom study of mythology, Viking history, or poetry. Joshua is also available for classroom visits.

Note: Due to slower than normal shipping times on account of COVID-19, we are currently providing a bonus ebook with all paperback orders. Thanks for your understanding.

The Gatewatch is a fantasy adventure inspired by the Norse Myths, the Icelandic Sagas, and the unforgettable landscape of the Rocky Mountains. Myth, history, and imagination fuse together in an epic troll-hunting saga written for young adult readers, and for the part of all of us that loves good adventure.

The accompanying Learning Guide is designed for use in Grades 7 to Grade 9 and is a free teaching resource for anyone who wishes to explore the Norse myths, Viking history, or Icelandic poetry through a novel study in their classroom. The text of The Gatewatch itself is rich with references to the Norse Myths, those ancient stories told by Scandinavian cultures all over Northern Europe and across the Atlantic during the period now referred to as the Viking Age. The characters encountered in the novel reflect the traits and habits of historical Vikings, most specifically the real-life Vikings described in the semi-mythic collection of accounts known as the Icelandic Sagas. Of utmost importance to Icelanders, as well as to all Vikings of that age, was poetry and so, for that reason, Icelandic verse forms and poetic riddles feature heavily throughout the story. For those who enjoyed teaching The Hobbit, Harry Potter, or The Chronicles of Narnia and would like to infuse their course with exciting new material, The Gatewatch offers a fresh fantasy world to explore with students.

Mythology is a core component of most middle year curricula and its exploration in the classroom can be enhanced through a supporting narrative like The Gatewatch. Viking history and myth presently enjoy much popularity, but with that comes many misconceptions and misrepresentations. At their worst these misrepresentations are used for nefarious political ends; in light of this fact, it is extremely important for students to learn about Viking history in a classroom context where archaeological facts, historical objectivity, and an attitude of inclusivity are emphasized. The Gatewatch presents the inspiration of Viking myth and history as a world heritage, for the benefit of all.

The Gatewatch also makes a perfect introduction for young adult readers to skaldic poetry, which centered around internal rhyme and alliteration, as opposed to the end-rhyme of most traditional Western poetry. Learning poetic forms distinct to specific cultures, such as the celebrated Japanese haiku, can be among the most memorable learning experiences for students. In a manner that will be familiar to readers of Tolkien, The Gatewatch uses skaldic verse to recall the history of the fantastic world just as Icelandic poets, known as skalds, recited mythological events and told of famous Vikings through similar forms. While phonetic and linguistic differences between English and Old Norse make it difficult to emulate skaldic styles such as dróttkvætt, málaháttr, and fornyrðislag exactly, a description of a close approximation that students can use to explore these forms is given in the preface of the novel as well as in the Learning Guide. 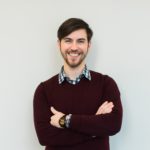 Joshua Gillingham is a Canadian author from the scenic city of Nanaimo, BC. There he enjoys life with his adventurous spouse and their two very unadventurous cats. He is the author of The Saga of Torin Ten-Trees, a fantasy adventure trilogy inspired by the Norse Myths and the Icelandic Sagas. His award-winning article ‘Becoming a Resilient Writer’ has been published multiple times in print and online. Joshua has also released a card game called ‘Althingi’ set in Viking Age Iceland, served as a co-editor for a collection of short historical fiction set within the game, and co-authored an Old Norse phrasebook, Old Norse for Modern Times with Ian Stuart Sharpe (Vikingverse) and Dr. Arngrimur Vidalin (University of Iceland).

With years of classroom experience as a teacher, Joshua loves to share his knowledge about Viking history and kindle the imagination of his readers by telling stories about the Norse myths. To inquire about Joshua’s availability for a virtual classroom visit, please send him an email at josh@crowsnestbooks.com. 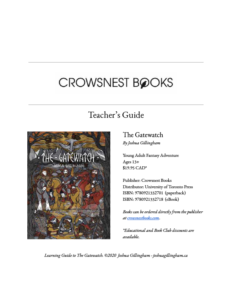 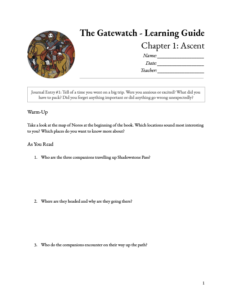 “As riddlesome as Tolkien and a rollicking as Howard, The Gatewatch is a timeless tale from the heart of northern myth.”
—Ian Stuart Sharpe, Creator of the Vikingverse Novels and Comics
“…a new Norse Fantasy book that is positively dripping with the drama, adventure, and magic of Old Norse Sagas.”
—Becky, The Valkyries
“The Gatewatch by Joshua Gillingham is a rousing homage and celebration of the timeless magic that is Norse myth and saga.”
—Paul, Bagends & Bookends
“This book didn’t feel like a typical fantasy book… It took me back to Beowulf and Grendel, it took me back to Norse sagas… it took me back to The Hobbit.”
—Alex, Spells & Spaceships
“Reading The Gatewatch feels like sitting around a campfire, the smell of the smoke hitting you as the breeze rolls through, the quiet rustling of the forest around you, the stars sparkling in the sky, the world just feeling at peace with itself… you’d be fooled into thinking this is a real Norse legend.”
—Callum, Adventures in Another Land
“I really liked Wyla. She’s fierce, headstrong and unapologetic which really reminded me of Clarisse from the Percy Jackson series! It was nice that she wasn’t used as a romantic plot device and that she wasn’t a perfect girl stereotype. She was brash, competitive and made mistakes making her a really relatable character.”
—Sophie, Book Blog & Candle
“If you’re a fan of dungeon-crawling role-playing games or love Tolkien’s Middle Earth, then you’ve found a treasure of a book and a storyteller to rival the skalds of old.”
—Eric Schumacher, Author of the Hakon’s Saga Series

“[T]ook me down memory lane and reminded me how much I miss those kind of stories, where I can be starry-eyed girl, listening to an epic adventure and a tale of friendship.”
—Kriti Khare, Armed with a Book